"Djmila" jewel .. takes you back to the Roman era in Algeria 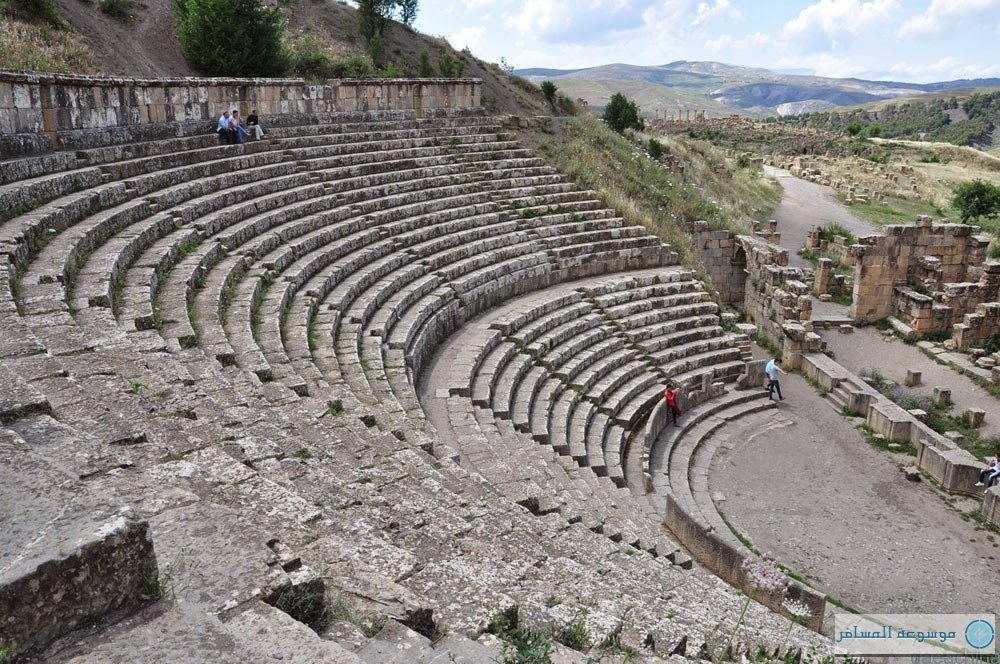 Is a beautiful city, or the city, "Koicol" archaeological, 50 km north-east of the city of Setif, near the north-eastern coast of Algiers, has been in football a Romanian cities important and perhaps what is left out of the effects still retains its structure original to now and their inclusion on the List of UNESCO in 1982, the most prominent signs on it.

A beautiful city and the masterpieces of the Roman era

And under the name of Cuicul, the city built during the first century AD as a military garrison is located on a narrow triangular plateau with rugged terrain and some thing, being located at the confluence of two rivers. Has turned its founders into a unified plan in construction including squares in the center and the main streets, and after it was military colony turned into a commercial market is great, and the resources that have contributed to the prosperity of this city's agricultural past (cereals, olive trees and farms).

Built Cuicu at an altitude of 900 meters above sea level in an important strategic location at the crossroads between the north and south and between east and west on the mountain ridge, surrounded by valleys, the city was inaccessible and therefore was easy to defend and control of the surrounding peaks.

The city consists of three parts: the old city or the northern suburbs, the new city or southern regions and the area called "Christian" country's southeast. Recent years have seen the establishment of the museum, which is accessed from the southern areas by trail lined with trees and lawns, near the entrance to the archaeological park located in the lowest part of the city.

The area has a beautiful archaeological many monuments Romania and there are Sahtan Amomcitan first was considered the center of the political life of the city, its hall meeting of the Senate and the court and the Temple of Venus, located on the side of the road or Cardo main east, a yard paved with a length of 48 meters and width is 44 m. She had been erected on the tile scene many statues inscribed with dedications attest to the loyalty to the emperors and the taste to brag to the African bourgeoisie, and is still visible yet.

The second was called Square South, is newly created for the first, was built arena second because of space constraints and urbanization, which oversees the arena Bnayatan superpowers are "Arc de Triomphe", which was held in 216 AD in honor of Emperor "Karkla", which restored today , and was used as an input for the yard, and the great temple which was built in 229 AD in honor and memory of the family "will meet Ross," which, led by the so-called "theater" that dig into the plateau based on bleachers seats.

In the late second century and the beginning of the third century AD fortress city became the original "old molds," which was the center of the political life of the city is not commensurate with the size of the urbanization of the city were built yard second sheet also named Vorom south or yard Asifirien. In contrast to the classical scheme, this arena with irregular shape was wider than Alforom old and less than crowded, as it was open to traffic.

Among the most prominent tourist attractions Romania catching the nose of visitors to this beautiful city, "bathrooms Romania" in the south of the beautiful, and that dating designed to have a lobby spends to the gymnasium in the form of a cellar, and frequented passes halls clothes to Hall chill a spacious quarters, a rich mosaic sheets alabaster, where two small basins and a large basin separated from the other two basins range from pink marble columns Allon.o then come Sokhna room. In part, Mnfman serving to moderate room temperature, and a small basin to its water preheat. He has built the largest in the reign of Emperor Commodus.

Side of the Capitol

The "Capitol" which is located in the north-east of Vorom and retains some of its parts to now was the political and religious center in Jimilh, dedicated to the worship of Jupiter, Juno, Minerva.


In the theater beautiful You are invited to watch the most beautiful left the Romans in this site and that drilling in the plateau underlying seats bleachers, and still preserves the now-preserved complete the wall opposite the stage, and decorated niches round altogether and square altogether, in order to obtain the resonance is good for votes. It can be accessed from the arc Sawiris, which opens on the scene, and can accommodate more than 3,000 spectators who place according to the social rank: Senate and riders in the front row, and the people at the top.

There are in this city antique museum called her name and includes a lot of important archaeological discoveries and unique, such as the shrine of Bacchus inspired by the legend of Dionysus. It consists of a courtyard garden with three rooms and roofed by the evidence and the columns and the backyard where there are mosaics and sculptures.


When roam during your trip to this city, which inevitably will repeat visit it would be brought to your attention the accuracy and beauty of urban design that characterized by homes that was inhabited by the general public, and in spite of that dwelleth therein not kings or princes, but the beauty of built geometric harmonic may suggest you do so .

Some of those houses there are in the old city, has conducted in-depth studies around recently. This was made possible thanks to the inscriptions, mosaics, know the names of some of the owners of this land, the likes of which Castorius built his house on a land area of 1600 m 2 which is a ruling with Lucius Kholod proto-yos. Like all the houses rich Castorius house was organized around an interior courtyard Ihvha portico surrounded by different rooms. 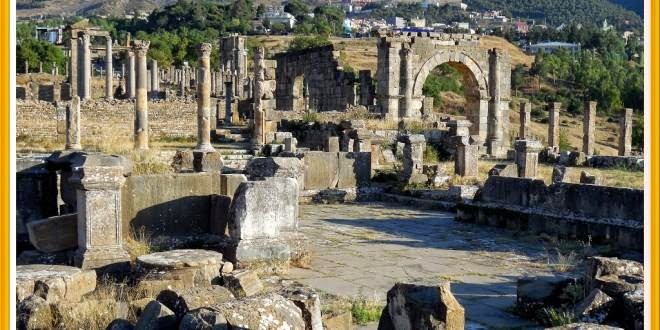 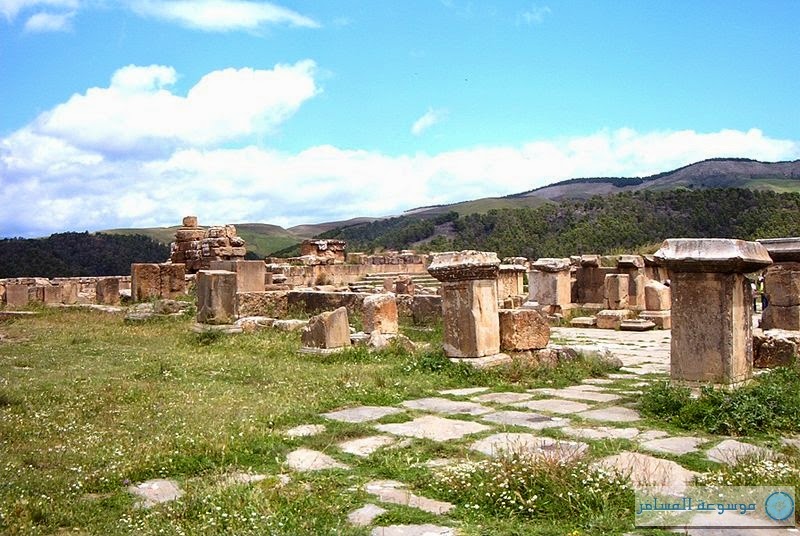 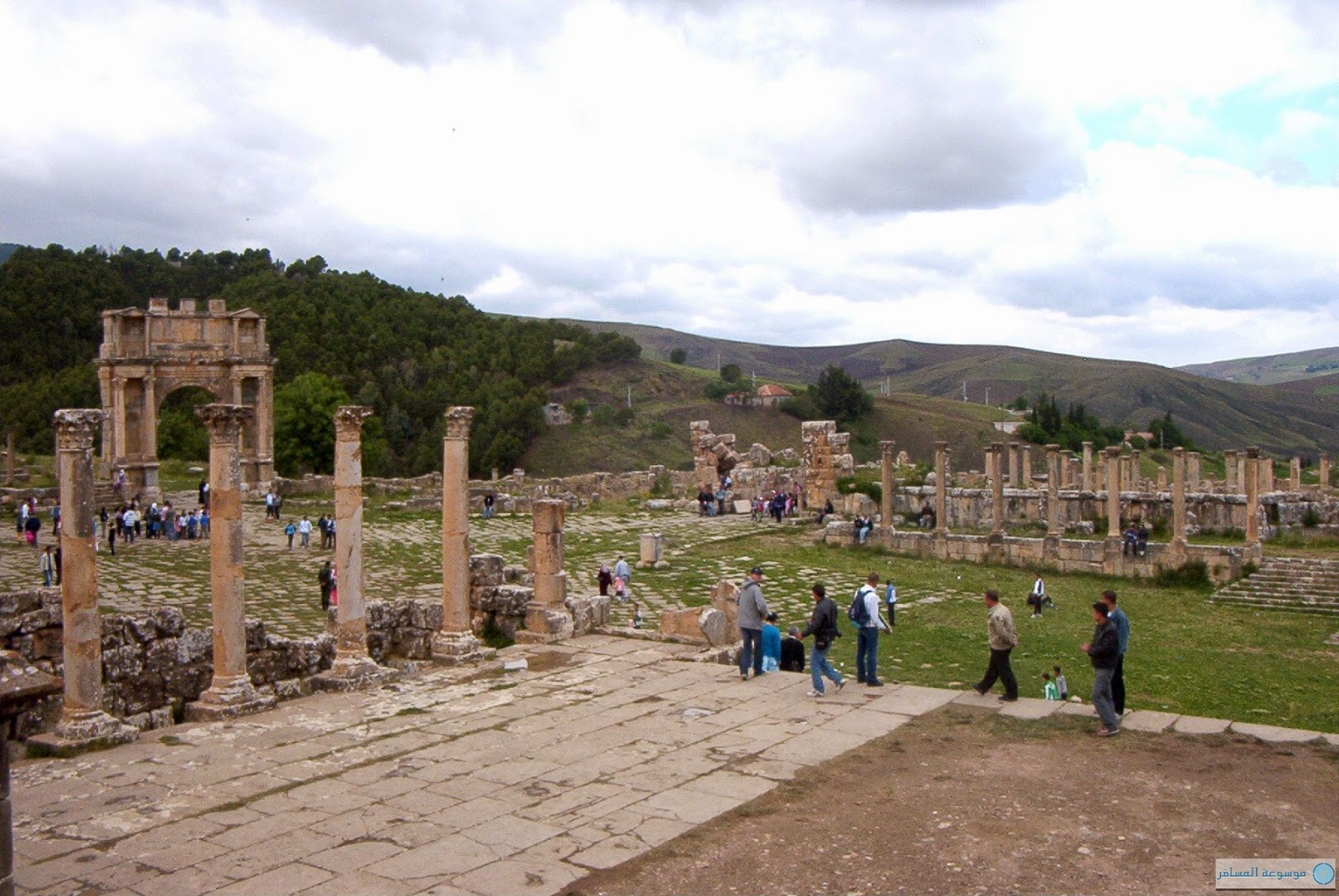 كن الأول دائما علق على " "Djmila" jewel .. takes you back to the Roman era in Algeria "